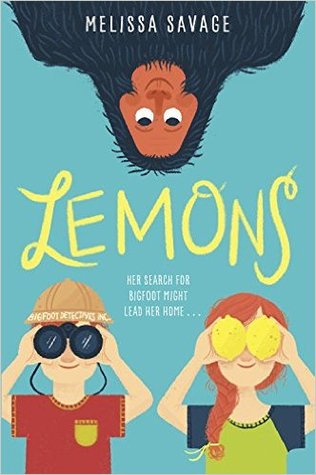 The search for Bigfoot gets juicy in this funny and touching story that’s perfect for fans of Kate DiCamillo’s Flora & Ulyssesand Katherine Applegate’s Crenshaw!

Lemonade Liberty Witt’s mama always told her: When life gives you lemons, make lemonade. But Lem can’t possibly make lemonade out of her new life in Willow Creek, California–the Bigfoot Capital of the World–where she’s forced to live with a grandfather she’s never met after her mother passes away.Then she meets eleven-year-old Tobin Sky, the CEO of Bigfoot Detectives Inc., who is the sole Bigfoot investigator for their small town. After he invites Lem to be his assistant for the summer, they set out on an epic adventure to capture a shot of the elusive beast on film. But along the way, Lem and Tobin end up discovering more than they ever could have imagined. And Lem realizes that maybe she can make lemonade out of her new life after all.“I love books about feisty girls and nerdy boys. Melissa Savage’s astoundingly good debut novel is packed with humor, mystery, friendship, family secrets, and even Bigfoot! I think you’ll love it, too.” –Karen Cushman, Newbery Medalist for The Midwife’s Apprentice

This book was one of my favorite books this year, which surprised me because it’s a middle grade book and something I don’t typically pick up often enough. I was instantly hooked to Lemonade’s story and her sidekick, Tobin. Or would it be the other way around?

After Lemonade’s mother dies, she is brought to her grandfather’s house in Willow Creek, California. They have never met and it’s a hard transition from what Lemonade is used to, living with her mother. She meets Tobin quickly and finds out what puts the town on the map: Bigfoot. These little detectives are always off on another adventure, trying to find Bigfoot and get the whole town involved in their work. Both Lemonade and Tobin end up finding more than they thought out in the woods on their hunts for Bigfoot and their friendship deepens as they realize that everyone has their own story to tell and obstacles in life that no one should bear, especially alone.

Falling in love with the characters in this book was very easy and it was incredible how Melissa Savage could write the characters how children would do and say at their age. I always found that fascinating about authors and creating characters many years younger than them. Tobin would get on my nerves, just as he did for Lemonade and I’d have to remind myself that that is how children that age act! Down to the core, they breathed life into this adorable novel and I couldn’t put it down. Another character who I ended up adoring as well was the grandfather. As I mentioned before, each character has a story and his is one of the sweetest and saddest. He was a perfect grandfather, always doing as much as he could and slowly creeping into Lemonade’s heart like she never thought she would imagine.

This is a very quick read and I loved it so much, I can’t even think of anything else to say without giving it away! PLEASE pick this up and read it for yourself. I laughed a lot, cried, smiled, was annoyed, and fell in love with the book, the characters, and the author’s writing style. I can’t wait to read more of her work!

Melissa D. Savage’s first book, The Lost Pony, premiered in her second grade classroom, winning high praise from critics such as her mom. Although the book was hand written and self-illustrated in Crayola Crayons, it was this experience that began her love of writing and to this day she still believes was one of her best works. Melissa continued to create stories growing up, writing different adventures for friends to read and later completed a Master’s Degree in Writing for Children and Young Adults at Hamline University in Minnesota. She was privileged to be able to receive guidance from amazing authors, educators, and fellow writers who shared their wisdom, experience, and support. Since then, she has been recognized for her work at the San Francisco Writer’s Conference in both the Middle Grade and Young Adult Genres. Most recently, Melissa’s debut book, Lemons has been recognized by the American Booksellers Association on their Independent Booksellers’ debut picks of the season list, Indies Introduce Winter/Spring 2017.

Melissa is a writer and a child and family therapist. She has worked with families struggling with issues of abuse, trauma and loss/bereavement. She believes that expressing oneself through writing can be a very healing process when struggling with difficulties in life.  In addition it can be a vehicle in which to honor, celebrate and continue to share the spirits of the special people who have left us too soon. Melissa lives in Minneapolis with her family. You can follow her on Twitter at @melissadsavage.

Connect with her at www.melissasavage.com.