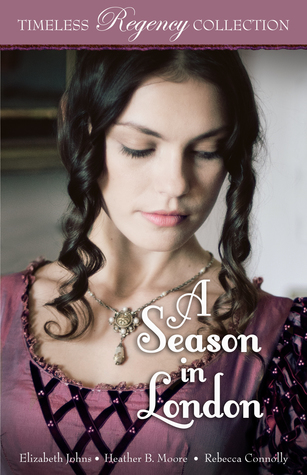 TITLE: A Season in London

From the publisher of the USA TODAY bestselling & #1 Amazon bestselling Timeless Romance Anthology series in Clean Romance, comes A SEASON IN LONDON.

POOR RELATIONS by Elizabeth Johns
As a ‘poor relation,’ Emma Standrich has already pre-empted her dismal Season by applying for a governess post. Her aunt and cousin are kind enough to sponsor her, but in truth, Emma is just waiting for it to all be over. Emma’s grief over the death of her brother while in military service casts a pallor on everything else in her life. When Colonel Shelton, the man who was her brother’s superior, asks her to dance at her first ball, Emma is more surprised than anyone. But she has questions for him, and soon she’s caught up in an intrigue she wasn’t expecting—both of the heart and the mind.

EDWARD & EMILY by Heather B. Moore
As a second son, Edward Blackwood never anticipated becoming heir to his family estate, or the need to find a wife and secure that inheritance. But with the death of his older brother, Edward is thrust into a life he never wanted. When his mother encourages him to be kind to his long-time neighbor Emily Foster, a girl he’d hardly paid attention to while growing up, Edward realizes that returning home might not be such a set-back after all.

A SPORTING SEASON by Rebecca Connolly
Daphne Hutchins is no simpering female who aims for a husband with a fortune. In fact, she’d be more than happy to live her life free of the heartache that men seem to bring. So when she sets out to play the fool in front of the ton during her first Season in order to send all eligible men running, she’s quite unprepared for James Woodbridge. Bored, but with a sense of family duty, James arrives for the Season, anticipating going through the expected motions befitting any gentleman. What he isn’t prepared for is Daphne Hutchins and the way she completely upends his heart.

I love reading from the Timeless Romance Collection and this one was full of three sweet novellas that pulled at my heart-strings. These were neat, especially, because they all focused around the seasons young people have in London as they become the proper age to court and marry.

The first story was a very sweet one. Emma has just lost her brother while he was serving in the military. His death was suspicious and Emma’s grief is great over this hopeful misunderstanding. Colonel Shelton was her brother’s superior officer and is fighting to learn the truth of his death and wishes to make up for his untimely death by meeting Emma. This was definitely a sweet story and I admired the writing characters a lot. One thing that irks me about these collections of stories, though, is that they are often too rushed or the pacing is off. Obviously these are short so I didn’t think negatively when I felt that it was definitely rushed. But the story was so similar to Jane Austen’s novels that I couldn’t really think of this as an original story which is why I would give this particular one 3 stars.

The second novella centers on Edward and Emily, two neighbors who have recently lost close loved ones in their life. Edwards’s older brother and Emily’s father. They both are thus responsible for keeping up their estates and Emily is quickly whisked off to London to find a husband. Not before meeting Edward again after years of absence. I felt like this story had great pacing and I didn’t feel particularly rushed at all. The story was original to me and I couldn’t help but fall in love with Edward and Emily as the love interest as well as the secondary characters. I appreciated the wit and easiness they both have as well. There was also enough background information about the characters that I wasn’t confused by events brought up or explanations that weren’t included. I gave this story 4.5 stars.

And the last story is about Daphne and her first season in London. However, she doesn’t desire a husband. Ever. Especially after her mysterious past. She fights against her mother’s wishes for a perfect season by embarrassing herself on purpose so that she never has to court anyone. Except James has seen her and reads her too well. He stubbornly speaks, follows, and stands up for her several times, even risking his own reputation. I wanted to really like this story. However, I was so confused from the beginning of Daphne’s intentions and then this mysterious past. It was difficult to wrap my head around the story after that. It definitely was a cute story with a gentleman who didn’t give up on her at any time, which was really neat to read. Daphne’s character is such an amusing one and she definitely surprised me several times throughout the story. I was confused a lot but I also appreciated how different this story was from many other that I’ve read. This story was probably around 3.5-4 stars to me because of this.

To find out more about these authors, simply click their names above and it will take you to their bios on Goodreads! 🙂